I had the honor to participate in the foundation of the Center for Hellenic Studies at the University of Chicago. We presented some reflections on Greece and the Greek World in the Humanities Day (October 19th). The following text is an idea I have had for a very long time and I took that opportunity to present it on that occasion. 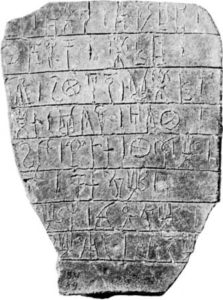 At the newly founded Center for Hellenic Studies much of our attention will be dedicated to the Greek Language, as we are particularly compelled by its distinction as one of the oldest living languages on earth and the oldest in Europe. From the Mycenaean tablets, to the header of TO BHMA, Greek has been the language of philosophy, tragedy, Byzantine liturgy, magical formularies, rhetorics, political discourse, and is associated with the inception of countless disciplines. With persistent prestige, classical Greek has been considered basic knowledge for higher education in the Western world until the 20th century, while Modern Greek has been an object of polarization and political debate in Greece presently. This is the chronological perspective of a language that covers millennia. Moreover, the geographical dispersion of the language remains of interest to us as well.

When one thinks about the expansion of the Greek language, the first thing that comes to mind is the empire of Alexander, which was the initial impetus for the great diffusion of the language towards the East. The next most common association is probably the Byzantine Empire and the shrinking territory of its political influence. Both of these visions, however, come from an ideological union of language with State, and generally disregard the power of other elements in the expansion of a language. Liturgy, travel, pilgrimage, trade, and even tourism were crucial in formulating the usage and prestige of what I like to call “Greek in the extremities.”

I would like to present a few examples from disparate areas in which the use of the Greek language, though perhaps marginal, had great symbolic value: Mauritania in North Africa, Bactria, in today’s Afghanistan, and Nubia. 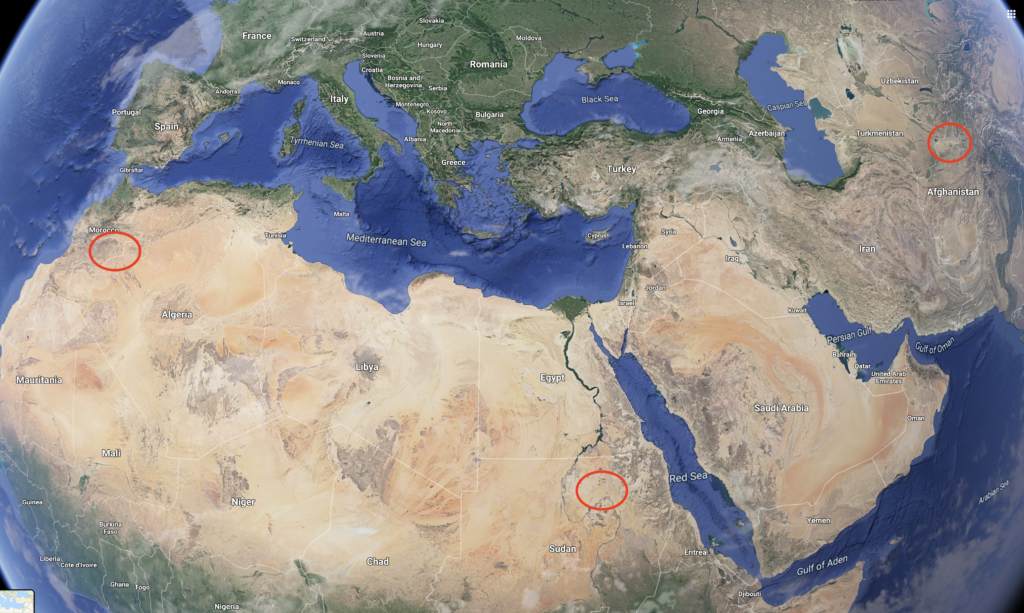 In Late Antiquity, the division of the Roman Empire marked even more dramatically the opposition between Latin in the West and Greek in the East. The Roman Empire had maintained the Greek language as the language of administration and culture in all of its Eastern provinces.

Everyday use of the Greek language, however, occupied some areas of specialization beyond these geographical spaces, like for example, liturgy. It is remarkable that in the Roman period, most epitaphs for members of the Jewish community in Rome are written in Greek. Is this because they had used the Greek translation of the Old Testament, the Septuagint, which had acquired a special value by this point? These communities probably spoke Latin in their everyday life, but preferred Greek for their eternal farewell.

More surprisingly, we find this phenomenon further into the West, in the North African province of MauritaniaTingitana, today’s Morocco. Below you can see an epitaph from Volubilis, dated to the first or second centuries of the Common Era, intended for Caecilianus, first citizen and father of the synagogue of the Jews, who died at the age of 45 years. He probably spoke Latin in his everyday life. It is not clear where the Jewish population in North Africa originated, but it is safe to assume that they used the text of the Greek Old Testament and felt that the language would be appropriate for their funerary epigrams. 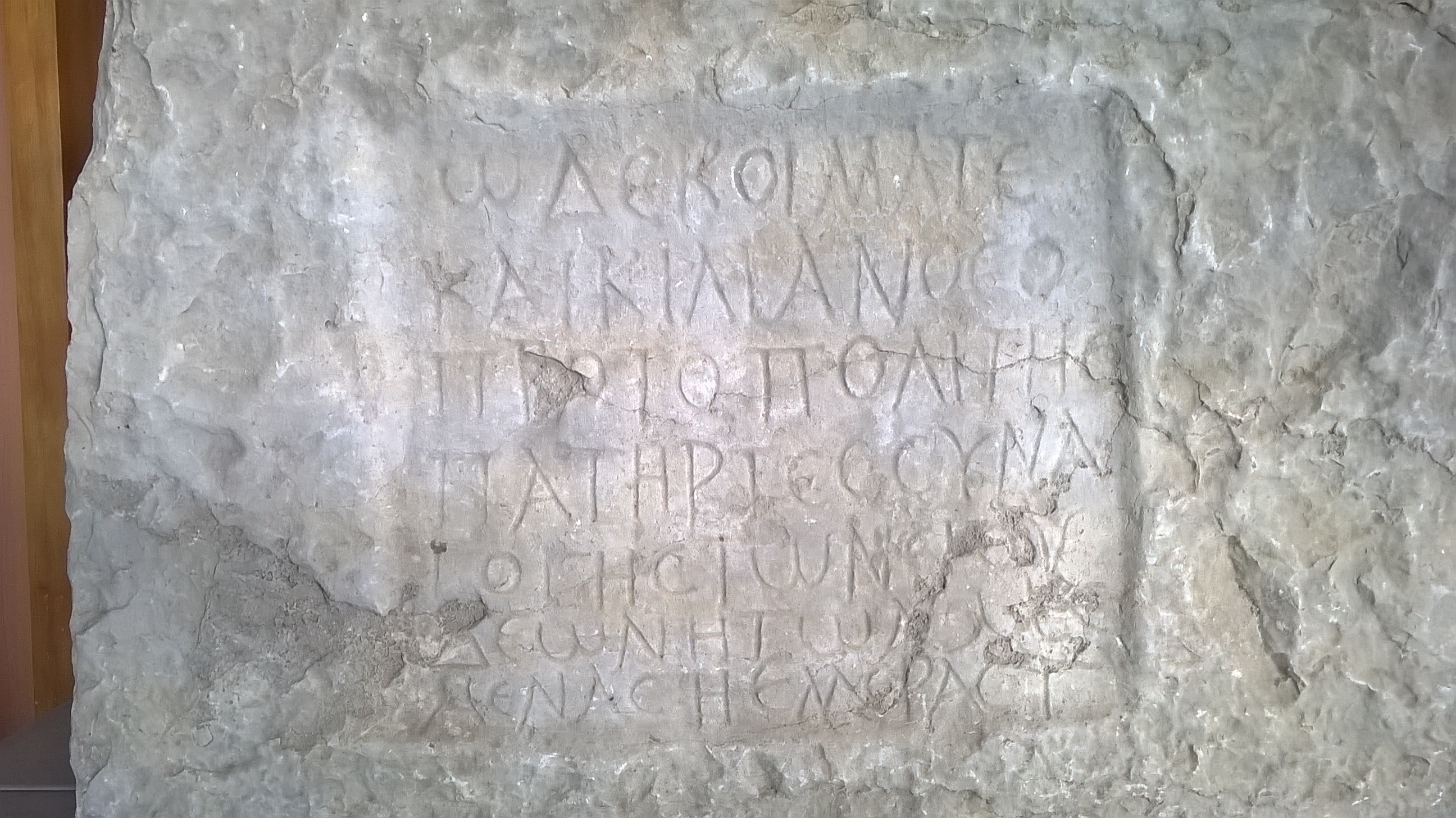 Moving Northeast to Bactria, in what is now present-day Afghanistan, the site of ancient Alexandria on the Oxus is one of the few places where papyri have been found outside of Egypt. Papyrus is an organic material, so in humid climates it disintegrates very quickly, while in the dry heat of Egypt it can survive for centuries. Below, you can see the severely-damaged remains of a papyrus book containing a philosophical dialogue on the First Cause. 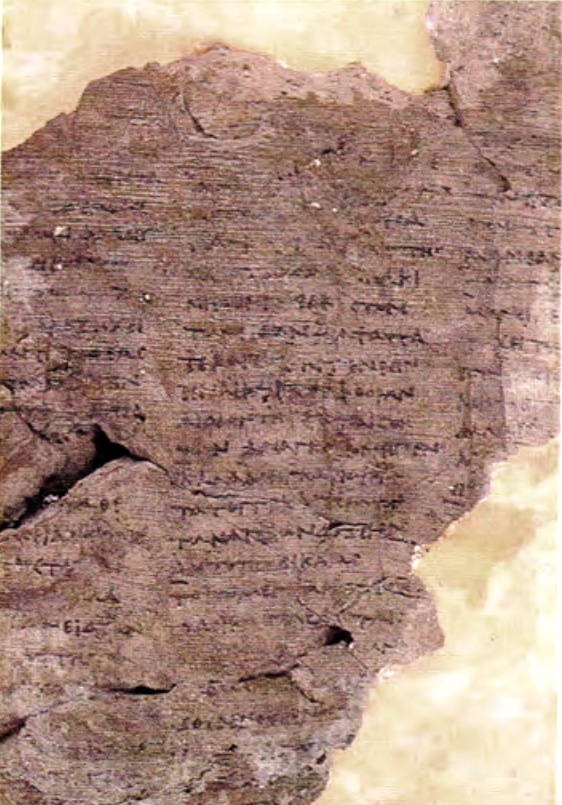 Part of the reason that the photograph appears to show the papyrus in such an unfortunate state of disrepair is because it is not actually the papyrus itself, but rather an impression of the papyrus’ fibers and ink upon clay. While the papyrus, as organic material, has decayed and disappeared, the impression survived substantially enough to bring us four columns of a philosophical dialogue, reminiscent of Plato’s:

– «Then it is most convenient that we now discuss which was the main and first of Causes»,

Journeying south of Egypt, towards what is now Sudan, we find multiple examples of Greek used in funerary epigraphy up until the 12th century. At that point Greek had lost both its prestige and common use in the northern neighbor, Egypt. Under Islamic rule, Christians used Coptic alongside Arabic, until ca 14th century. But further south, the Greek Prayer for the dead remained an very popular choice in these funerary inscriptions. The image below comes from excavations at Ad-Donga in Nubia. 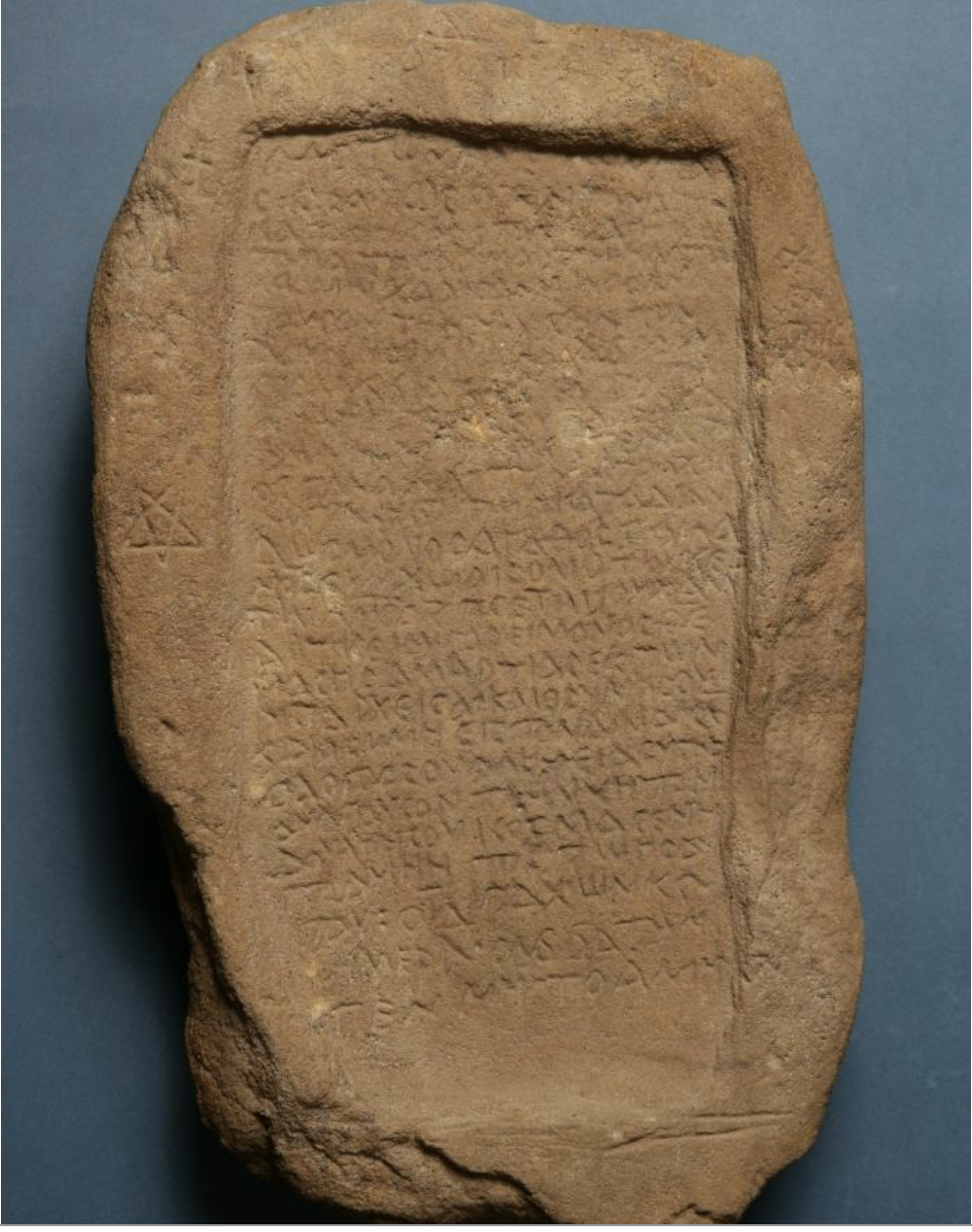 In the 1960s, many foreign missions were invited to participate in rescue excavations previous to the construction of the Aswan dam that would end up submerging all villages and their artifacts situated along the riverside. The United States, for example, obtained the temple of Dendur, housed today in the Metropolitan Museum, in exchange for their archeological intervention.

The population of Nubia in the middle ages, conversed using an ancient Nubian language, but Greek was again considered a language adequate for their eternal farewell:

“God of all spirits and all flesh, you who have trod under death and have rendered ineffectual the devil, and have given life to our world, rest the soul of your departed servant”.

If we think of further expansions of the Greek language, like for example, to the New World, there is much ado in terms of use and prestige at present as well. The Ivy League universities, until the beginning of the 20th century would require Greek study for all students. All students on a campus would recognize and understand a Greek inscription like this one, on 57th street in Chicago, at the University Church. 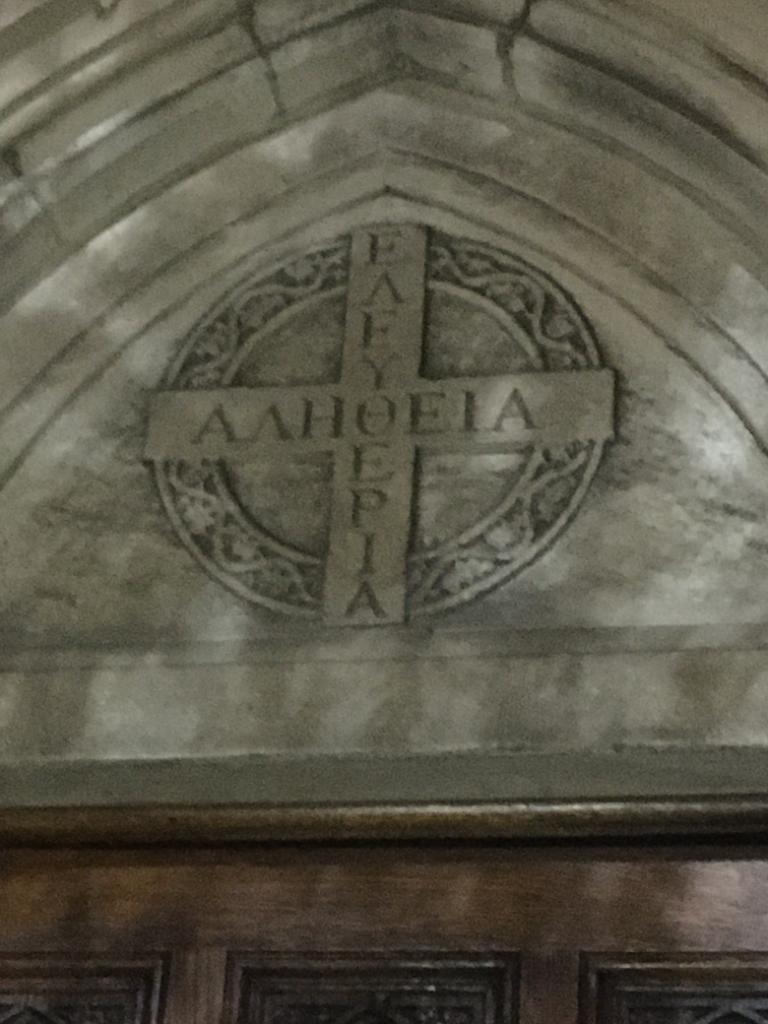 In this case, Greek has arrived to foreign shores hand in hand with erudition and partly in thanks to liturgy and the study of the New Testament.

Finally, let us not forget the most recent agent for the expansion of Greek, which is neither political expansion nor cultural influence, but emigration. Greek communities are thriving in the New World and in the southern hemisphere. They gather around common cultural and religious elements, and often, although not as often as some might prefer, around their language. 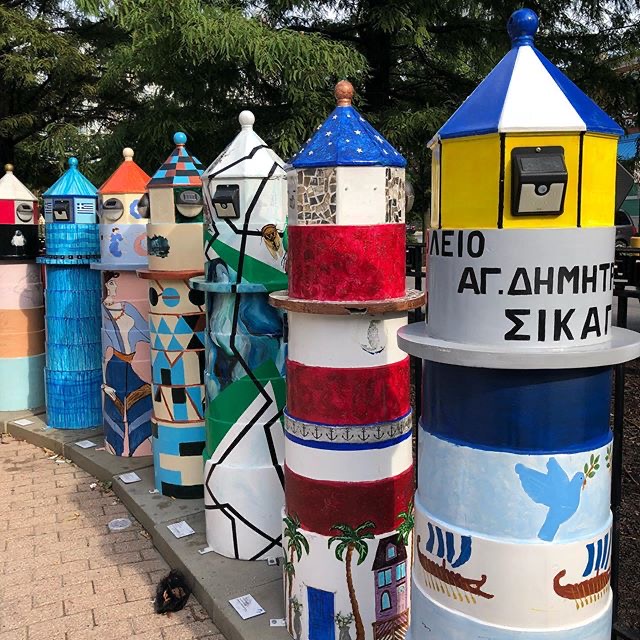 As a student of the past, I can’t tell you what the next chapter in the wanderings of the Greek language will be, but I am sure that they will yield tales just as fascinating and wide-reaching as the ones that I have just presented.

(Special thanks to Lucas Binion for his assistance)

This site is part of Humanities Commons. Explore other sites on this network or register to build your own.
Terms of ServicePrivacy PolicyGuidelines for Participation
Skip to toolbar